A Passion Most Pure~ by Julie Lessman 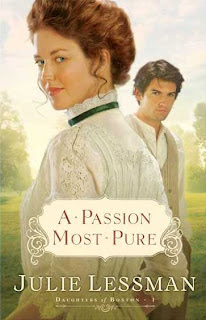 A Passion Most Pure~ Julie Lessman

This book was sooo good. It was one of those "can't put it down until its finished books" which made getting work done a little difficult :) I won't spoil it by telling you any more that the official description, but I will tell you that I can't wait for the sequel.

She's found the love of her life. Unfortunately, he loves her sister ...As World War I rages across the Atlantic in 1916, a smaller war is brewing in Boston. Faith O’Connor finds herself drawn to an Irish rogue who is anything but right for her. Collin McGuire is brash, cocky, and from the wrong side of the tracks, not to mention forbidden by her father. And then there’s the small matter that he is secretly courting her younger sister. But when Collin’s affections suddenly shift her way, it threatens to tear Faith's proper Boston family apart.Refusing to settle for anything less than a romantic relationship that pleases God, Faith O'Connor steels her heart against her desire for the roguish Collin McGuire. Collin is trying to win her sister Charity's hand, and Faith isn't sure she can handle the jealousy she feels. Full of passion, romance, rivalry, and betrayal, A Passion Most Pure is Book 1 of the Daughters of Boston series. 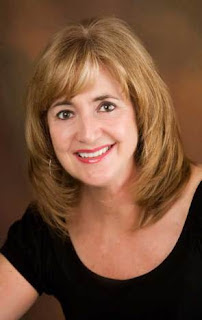 Julie Lessman is a debut author who has already garnered writing acclaim, including ten Romance Writers of America awards. She is a commercial writer for Maritz Travel, a published poet and a Golden Heart Finalist. Julie has a heart to write “Mainstream Inspirational,” reaching the 21st-century woman with compelling love stories laced with God’s precepts. She resides in Missouri with her husband and their golden retriever, and has two grown children and a daughter-in-law. A Passion Most Pure is her first novel. 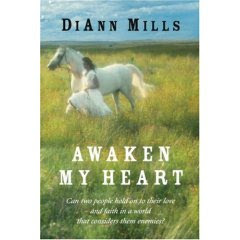 Awaken My Heart~ By DiAnn Mills

This book was great and a little different from the norm. It tells the story of a woman who is caught between loyalty to her father and doing what she knows is right. I like how the book talked about the need to respect your parents as God says even if they do not always do what you think is right and also how God can use a difficult situation to bring you closer to him. There also was a romance between the main character and her father's sworn enemy that adds another dimension to the book. So check it out, this book is an adventure I am sure you will enjoy.

1803, the colony of TexasAwaken My Heart is set in 19th century Texas and tells the story of 18 year old Marianne Phillips, the daughter of a wealthy rancher, Weston Phillips. Weston is involved in a hostile struggle with Armando Garcia, the infamous rebel leader of the 'mestizos' who claim to own the land that Phillips has settled.Marianne Phillips, the daughter of a wealthy rancher, has never agreed with her father's harsh treatment of the poor mestizos who first inhabited the colony of Texas. When rebels kidnap Marianne, in hopes her father will trade back their land for her freedom, she realizes her loyalty lies with her abductors, not her father, who plans to marry her off to the don of a nearby estate. Armando Garcia is the locals' reluctant leader, but his people revere and depend on him. Knowing that without his leadership they'd be forced from their land, Armando accepts his role, but does not approve of the latest attempt to manipulate their enemy. When he learns that Marianne actually speaks his language, of her loyalty to his people, and of the faith that keeps her strong, Armando is faced with a difficult decision. Will his newfound love keep him from letting her go? Or will he set her free and risk losing their land forever? 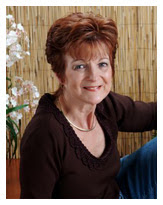 Award-winning author, DiAnn Mills, launched her career in 1998 with the publication of her first book. She is the author of numerous titles including novels, novellas, and a nonfiction. In addition, she's written several short stories, articles, devotions, and has contributed to several nonfiction compilations.DiAnn believes her readers should "Expect an Adventure." Her desire is to show characters solving real problems of today from a Christian perspective through a compelling story.Several of her anthologies have appeared on the CBA Best Seller List. Three of her books have won the distinction of Best Historical of the Year by Heartsong Presents, and she remains a favorite author by Heartsong Present's readers. Two of her books have won short historical of the year by American Christian Fiction Writers both in 2003 and 2004. She was named Writer of the Year for 2004 at the 35th Annual Mount Hermon Christian Writer's Conference and is the recipient of Inspirational Reader's Choice Awards for 2005 in the long contemporary and novella categories.DiAnn is a founding board member for American Christian Fiction Writers, a member of Inspirational Writers Alive, ChiLibris, Advanced Writers and Speakers Association and a mentor for the Jerry B. Jenkins Christian Writers Guild. She speaks to various groups and teaches writing workshops. DiAnn also belongs to Cy Fair Women's Networking, an exclusive professional women's networking organization.She lives in sunny Houston, Texas, the home of heat, humidity, and Harleys. In fact she'd own one, but her legs are too short. DiAnn and her husband have four adult sons and are active members of Metropolitan Baptist Church. 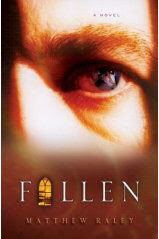 This book was extremely thought provoking. The dilemma Jim finds himself in when he sees his married pastor getting out of the car with an attractive woman in the drivers seat continues to intensify as he discovers more about his pastor and in the process takes a long look at himself.

Jim was at work when his eyes drifted to the coffee shop visible from his office window. An attractive woman driving a Mercedes pulled up to the curb . . . and Jim’s married pastor emerged from the car. When Jim delves deeper into his pastor’s world, will he be able to handle what he discovers? Is he right to suspect that Dave is having an affair? In the behind-the-scenes church battle that ensues, Jim is torn between duty to his church and a desire to show grace. A ripped-from-the-headlines drama of suspense that keeps you engaged to the last page. Fallen is the story about Jim’s relationship with Dave—how Jim tries to do the right thing to keep Dave accountable, but finds the situation getting worse and worse. It’s also about Jim’s other relationships. Just as he discovers hypocrisy in Dave, Jim discovers his own sins against his wife and daughter. 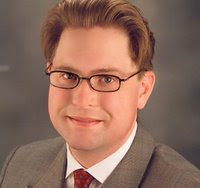 Matthew Raley is senior pastor of the Orland Evangelical Free Church in northern California, where he lives with his wife and two young children. For fun, he enjoys playing chamber music with friends, giving occasional solo recitals, and playing first violin in the North State Symphony. This is his first book. 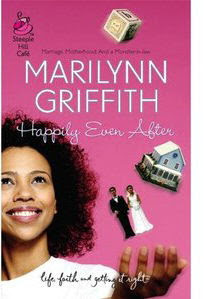 Happily Ever After~ by Marilynn Griffith

Superwoman doesn't live here!I marry a gorgeous executive, have a baby, lose all the weight (most of it), and move to a fine house in the suburbs with a welcoming new church. Wait...did I say welcoming?One teeny waaah! and new mothers and their crying babies are exiled to a separate room. At least there's some enlightening conversation. Like about my husband and issues I didn't even know about!And then there's my aptly named mother-in-law, Queen Elizabeth, who can't stand me.I'm about to lose my mind! So it's high time for a visit to the Sassy Sistahood for some much-needed advice about men, marriage and motherhood!
The Sassy Sistahood: They get by with a little help from their friends.

I really enjoyed this book. It was a continuation of the Sassy Sisterhood series, so it was nice to learn more about Tracy's story. This book was full of hilarious and poignant moments that are so typical of Marilynn Griffith's books. They make you think along with making you laugh. This was an interesting look at marriage and how it is work to keep a relationship together. Nevertheless if you approach it God's way it is a wonderful life changing experience. 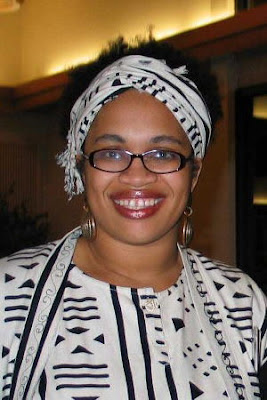 Marilynn Griffith is mom to a tribe, wife to a deacon and proof that God gives second chances. While best known for her colorful novels about friendship, family and faith, Marilynn is also a speaker and nonfiction writer.Her nonfiction has been included in CHICKEN SOUP FOR THE CHRISTIAN WOMAN'S SOUL and several other devotionals and magazines. Currently, Marilynn is editor of the SISTAHFAITH:BELIEVING BEYOND SHAME anthology. She is also the founder of Faithchick.com, a blog for faith fiction readers.Marilynn is the author of six novels dealing with issues such as teen pregnancy, AIDS, abstinence, stress relief, single parenting and marriage. Her recent fiction titles include TANGERINE and IF THE SHOE FITS.Marilynn has served as Vice President and Publicity Officer of American Christian Fiction Writers. She speaks to youth, women and writers about believing beyond boundaries and daring to reach dreams.Marilynn lives in Florida with her husband and seven children whom she taught at home for seven years. When not chasing toddlers, helping with homework or trying to find her husband a clean shirt, she can be found scribbling furiously on her next novel.To book Marilynn for media interviews, speaking engagements, Serious Fun fiction parties or book club call-ins, please contact her thru her WEBSITE.